Home » News » What are the steps for the protective film to be perfectly attached to the surface of the product?

What are the steps for the protective film to be perfectly attached to the surface of the product?

1. Prepare a suitable large and flat work space-larger than the object to be protected-clean and free of dust, liquids or contaminants.

2. Put 4.5 feet of double-sided tape near each end of the workspace... about 8.5 feet apart. These will be used to hold the film, not the material to be protected.

3. With the adhesive side facing up, unfold a small section of the protective film. Make sure it is smooth and wrinkle-free, and evenly attach the loose end to one of the double-sided tapes.

4. Continue to unfold the protective film and place it along the length of the work surface not far from the other double-sided tape.

5. Now, roll up the film and place it on top of the double-sided tape. Be careful not to pull the original connection end out of the tape. Adjust the direction of the film to ensure that the film is straight and free of wrinkles. It is properly tightened, but not so tight that the film will shrink later. When the film is stretched during use, the edges tend to pull up when the film tries to return to its original shape. 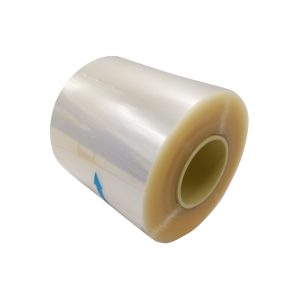 6. Lower the film onto the double-sided tape on the second layer.

7. Using a utility knife, cut the roll from the film that is now waiting to receive the sheet to be protected.

8. Place one edge of a piece of material on one end or one side of the protective film. Place it where the film is held by the double-sided tape.

9. Gradually place the parts on the adhesive film. Note: If the material is flexible, when you place it on the film, bend it slightly to roll it up and allow air to escape between the material and the film.

10. To ensure that the sheet adheres to the film, apply pressure to the material, especially along all edges, to ensure good adhesion. A clean paint roller may be used for this purpose.

After the above steps are completed, the protective film can be perfectly attached to the surface of the product without causing unsightly wrinkles or bubbles on the surface, especially on the surface of irregular products, which is difficult to handle.

Next : Common causes that affect the adhesiveness of tape