Electrical signal shielding mainly depends on the excellent conductivity of copper itself, while magnetic shielding requires the conductive material “nickel” of the copper foil to achieve the role of magnetic shielding, and is therefore widely used in mobile phones, notebook computers and other digital products in. 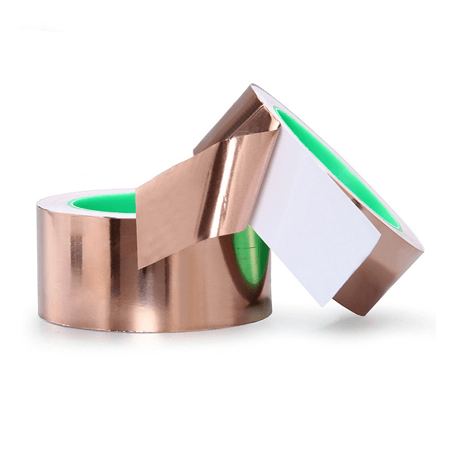 Copper foil has low surface oxygen characteristics, can be attached to a variety of different substrates, such as metals, insulating materials, etc., with a wide temperature range. Mainly used in electromagnetic shielding and anti-static, the conductive copper foil is placed on the substrate surface, combined with the metal substrate, has excellent conductivity, and provides the effect of electromagnetic shielding.

The purity of the copper foil is higher than 99.95%, and its function is to eliminate electromagnetic interference (EMI), isolate the electromagnetic waves from harming the human body, and avoid affecting the function without the need of voltage and current.

In addition, It has a good effect on the static discharge after the article is grounded. Its strong adhesive force and good electrical conductivity, we can cut into various specifications according to customer requirements. Copper foil tape is very versatile.

It has several properties such as heat preservation, heat insulation, waterproof, good adhesion, good cold resistance, easy to tear, can eliminate electromagnetic interference (EMI), isolate the harm of electromagnetic waves to the human body, and avoid the influence of voltage or current.

Prev : The benefits of eva insoles?

Next : What is a absorbing material?