Home » News » What problems are easy to occur in the die-cutting process of release paper?

What problems are easy to occur in the die-cutting process of release paper?

Release paper is actually a type of release paper, which is called release paper, risolation paper, silicone oil paper, etc. by many people. Its main function is to prevent prepregs from sticking to each other. It is generally composed of a three-layer structure. , The first layer is the bottom paper, and then the film is coated, and the back is silicone oil. Now release paper has been widely used in electronic products, automotive foam and medical fields, but in most cases, it is used with viscous materials. So what problems are easy to appear in the die-cutting process of release paper?

1. This kind of paper is easy to tear off when it is pasted, but it is difficult to peel off after one cycle (24 hours), and it cannot be pulled off after three cycles. This kind of release paper is mainly unstable, the paper density is not good, the coating is uneven, and its impermeability is poor. Therefore, the glue can penetrate into the release paper during a cycle of pasting, so it cannot be peeled off! So it must Replace the paper with better density, better paper, uniform silicon coating, and lower paper.

2. Imported double-sided tape has poor peeling. Many tapes will have this phenomenon, because the physical properties of imported double-sided tape are different. The conventional ones are mainly 3M, Nitto, Sony, Sekisui, TESA, etc. If the material has a base material, many manufacturers use a base paper for die cutting for convenience, which leads to poor peeling. Therefore, it is necessary to judge the adhesiveness of the tape, and use the backing paper separately when the adhesiveness of the tape is relatively poor. 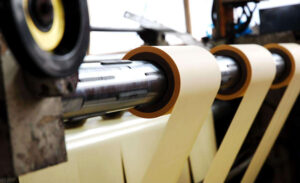 3. The tape used for pasting can be used normally, but it is difficult to discharge waste after die cutting or because the product is too small to be peeled off. In this case, we should pay attention to it. Some products are easy to pick up during the waste disposal process, which shows that the peeling force is too light. You can choose to try a little heavier. It is also normal if it cannot be peeled or the peeling is poor (especially if there is no substrate), because the product area is too small, and the peeling force is not light enough to cause deformation and other phenomena when peeling, so it is necessary to use a lighter Release paper.

Prev : How to correctly use 3M double-sided tape to paste better?

Next : Ten commercial applications of graphene in the future